If music be the food of love…play on

There is no doubt about it, the way we consume music and interact with artists is evolving and I have a feeling it’s all set to change again.

Since lockdown began for me (47 days and counting), I’ve seen dozens of musicians creating content across a plethora of platforms. I’ve consumed as much as I can handle, experimental Zoom calls, Kitchen Raves, Q&As on Instagram Stories, yoga sessions with singers, I’ve even taken a trip to the Moulin Rouge with 500 strangers and re-visited my favourite festival performances thanks to the likes of Play On Fest. Oh, and I’ve seen Frank Turner perform about ten times for many fantastic causes. That man is always on tour, even when he’s home, he’s got to be the hardest working person in music right now.

Some transitions have been very natural and smooth, with many performers showing fans how comfortable they are in front of the camera (sometimes a little too comfortable). twenty one pilots have even written and released a new single, Level of Concern, which rocketed to Number One on the USA Rock Billboard Chart. The video has had over 23 million views on YouTube in the last three weeks. Other attempts have been less successful and fraught with error messages such as ‘Sorry, our server has crashed due to unprecedented demand’. 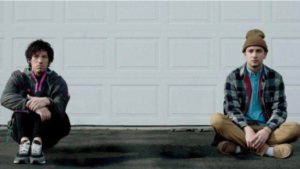 As was the case with Minecraft’s first ‘in game’ festival, Block by Blockwest. Originally due mid-April, fans will now have to wait until mid-May as the entire event has been postponed due to overwhelmed servers. 100,000 fans logged in hoping to witness Fever 333, IDLES, Pussy Riot and grandson, playing live in game. A virtual festival space was created to reflect the atmosphere of a real life festival with fans being able to customise their looks and bands being able to have their staging and lighting just right. I await with bated breath. Minecraft have already pulled off some incredible feats of technology and I have no doubt that Block by Blockwest will be equally as epic.

Until then I’ll continue watching Twitch streams of gigs, one of the strangest I’ve come across was Mark Hoppus from Blink-182 jamming on his guitar while his son played Animal Crossing. An unexpected piece of content that I never knew I needed. It should come as no surprise to us that music and gaming go hand in hand. I’ve often purchased the music from my favourite games and at uni I listened to them while studying – the classical mix really increased my focus. I’ve even seen an orchestra rendition of music from favourite Square Enix titles (Final Fantasy, Kingdom Hearts and Chrono Trigger) live at The Barbican.

Spotify was ahead of the curve on this trend, launching their custom gaming playlists years ago. Recently they published a report showing that during the first month of lockdown, popularity of the curated gaming playlists rose by 41%, most interestingly the biggest increases occurred in the early morning. More people seem to be gaming or tuning into gaming music between 6am-9am. Perhaps this is the new commute for many. There has also been an increase in people listening to Spotify through their gaming consoles since the start of Lockdown.

It’s great to see that musicians across the world are finding new ways to engage with fans and raise money for their crew, music venues and charities. Post Malone has made over＄2.7 million for Covid charities from his surprise Nirvana Tribute.

Facebook are riding this wave and are set to launch their own ticketed virtual gig platform this month. This is much needed as their current system shuts gigs down after around an hour which led both the performer and fans with some confusion.

When this is all over, we’ll remember the artists that helped us through this time. Those who opened up their homes, show themselves without the stage makeup and costumes, who engage their fans without scripts or agenda are going to come out on top.

Offline, people are hosting gigs for their toys, this isn’t a new trend as I’ve seen countless examples in fan groups, but it’s been amplified. The most bizarre new trend I’ve been seeing comes from Denmark in the form of drive-in gigs. The sound is transmitted to the car-bound audience via FM waves. The same way the old drive-in movie theatres ran.

Artists are getting me through this dystopian time and while many have very much been – catch it live or miss out (further fuelling my FOMOO – fear of missing out online) there are plenty of fun things still floating around.

Here’s a round-up of some of my favourite pieces of content so far:

All About You – McFly – https://www.youtube.com/watch?v=NyDyllvEFfs

The entire Yungblud gig that I was meant to be at, recorded without an audience – https://www.youtube.com/watch?v=usms-qHCADA

Reg&Co are a sponsorship and brand partnership agency

Let us show you what we can do​